Looking to step up your game of cooking? Consider a convection oven – they’re better in several ways.

They’re faster, yet they use less energy, and most importantly, they cook the food evenly – thanks to the hot air circulation inside.

But what if you knew all this before my telling and already own a convection oven, and landed here looking for some great turbo convection oven recipes?

Well, we got you covered on that too. Keep reading.

In a traditional oven, the heat rises to the top. This helps foods cook faster on the top rack than the items on the bottom rack. If, for instance, you’re making a lot of muffins for a bake sale, and want to use every available rack, then you’ll run into some issues. The muffins sitting on the bottom rack will still be underdone while the ones on the top rack are fully baked. 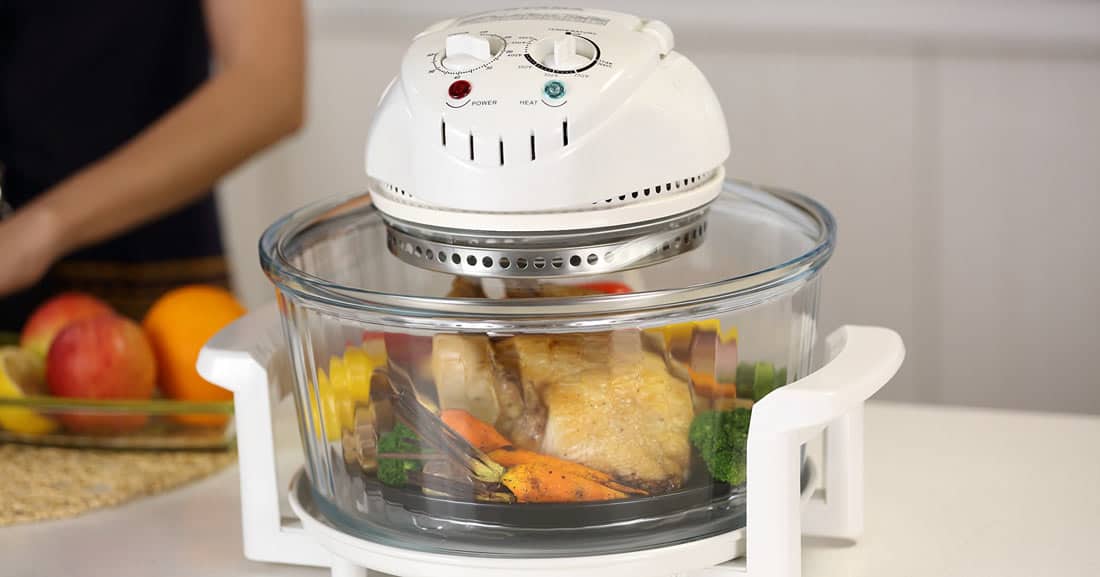 But a convection oven has a fan within the cooking area that circulates the hot air, similar to an air fryer. Thus, everything cooks more uniformly because the hot air doesn’t sit just at the top and the heat inside the cooking chamber is distributed evenly.

While this might sound simple, it makes a huge difference. It means that the tops of the pies won’t be overcooked while the bottom is still soggy. The roast chicken gets browned uniformly. Even better, you can be confident that foods in both the bottom and top rack will be done in the same amount of time.

Usually, conventional ovens are 25 to 30 degrees cooler than a convection one which is set at the same temperature. Because most recipes you find are typically intended for traditional ovens (unless they specify otherwise), so, to accommodate the difference for a convection oven, you’ll have to set the temperature to about 25 degrees F (about 15 degrees C) lower.

On top of that, you will find that convection ovens cook 25 percent faster than traditional ovens even with the temperature adjustment, particularly if the food is a large object, like a turkey.

The cooking time needs to be shortened, or at least you need to keep an eye on your food. It is nice to have a quicker cooking time, however. In a speedy convection oven, meat is less likely to dry out. Pastries also come out crispier because the extra heat rapidly steams the fat in the pastry, forming flaky layers.

And because convection ovens are so efficient and heat up fast, for most use cases, they do not need to be preheated. And for the very same privilege of being efficient, they use about 20 percent less energy per annum than conventional ovens, as the US Department of Energy says.

However, not all food is suitable to be cooked in a convection oven. Delicate baked goods, like custards, souffles, angel food cake, and even many quick breads aren’t the best fit for convection ovens.

That’s why people often call it a glass bowl convection oven as well.

So, it’s a great starting point for people to get introduced to a convection oven (without breaking the bank) that can cook equally well as a regular convection oven, just on a smaller scale.

Enough introduction, should we get to cooking?

Let’s see if we can roast a whole chicken and some veggies with our turbo aka halogen convection oven.

A halogen or turbo convection oven is a great way to cook the ideal roast chicken. The instant heat of halogen browns, sears, and seals in the juice while the convection fan pumps air around to heat the chicken evenly and also speeds up the cooking time. 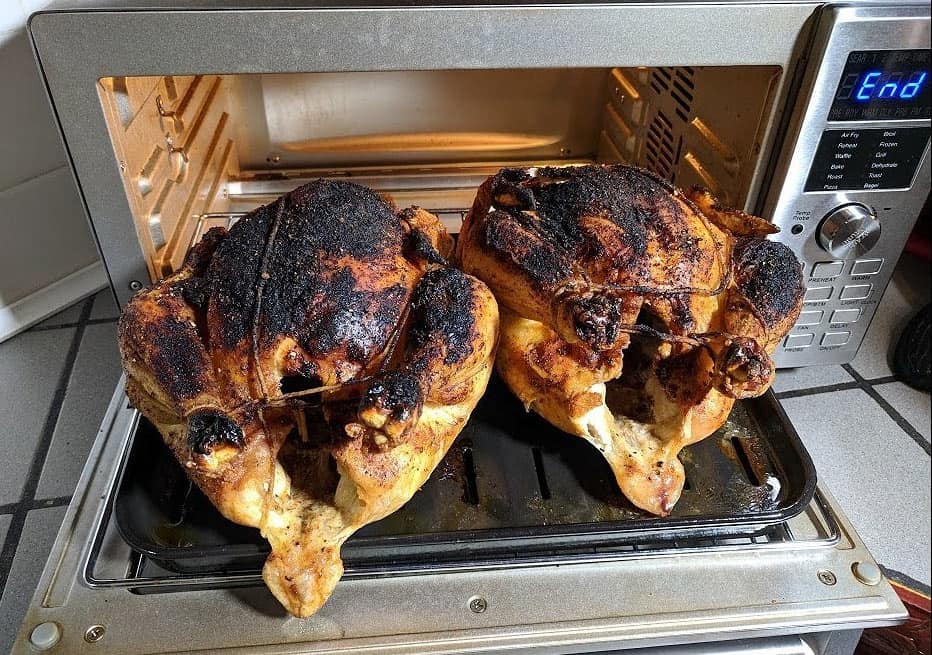 It’s a full meal recipe that takes minimal effort and time to prepare, again thanks to the fast-cooking capability of our oven. It should take around an hour to prepare the meal which makes up for 8 servings.

We’re going to talk about 3 ways that you can cook your beef joint in the halogen cooker. The overall process is similar, but how you choose to place your beef in the cooker can yield different results. There are 3 recognized ways and we’ll talk about all of them so you can decide. The overall time to prepare the meal should be around 1 hour and 25 minutes, where you prepare for 35 minutes, cook for 50, and let it rest for 30 more minutes.

The first method is to put the beef joint onto the lower rack of the oven and place something under that to catch the drips coming out. I think this is the best way to use the turbo convection cooker as it was meant, because the hot air can circulate to reach all parts of the meat, especially the bottom side.

However, there are other practices that are appreciated for cooking beef joints. The second method is to put the meat onto the bottom, directly on the glass of your halogen cooker, and let the beef cook in its own juices.

Many prefer the taste that comes out from this method of cooking. This method also allows you to add veggies to the cooker and cook everything at once. Halfway through, you might want to baste but do not add cold water directly or it might break the glass. Also, keep an eye on the vegetables to make sure they don’t dry out.

For the third method, you can place the beef in a tray and then put that tray onto the bottom rack rather than putting the meat directly onto the rack. This way, the hot air will heat up the tray which will act as a source of heat in the bottom of the meat and make it cook evenly. You can add veggies in this method too.

You can try all the methods separately and see which one yields the best result for your taste. How to Bake Frozen Food in a Convection Oven?

You can set the temperature and don’t have to worry about cooking your frozen food over or under. As with all Convection Ovens, you need to figure out what the right temperature is to cook your food when you first get it. I use the recommended temperature and decrease cooking time.

If it says that I need to cook at 170 degrees C / 340 degrees F, I will reduce the cooking time by five to ten mins and check when it’s cooked. Just give it 5-minute increments if it needs longer, until it’s ready. I could give you precise times for cooking, but every convection oven is different. Experiment and know your oven so that each time it can cook delicious food.

What Can You Bake?

Here’s the food that I’ve baked so far –

Here’s how you bake frozen food in your convection oven (a general instruction):

Preheat the oven. On the frozen food box, check the recommended baking temperature and reduce it by 25 degrees if you are baking that item alone. A higher temperature would be required for a crowded oven with food on several racks.

On a medium-weight aluminum cookie sheet with low sides, put your frozen food. For convection ovens, a light-colored sheet works better as it will prevent the food from browning too quickly.

Check the suggested time on the box and set the timer down by a few minutes. In a convection oven, food cooks quicker, especially if only one item is being baked.

Set the long side of the cookie sheet parallel to the oven door. Rather than opening the door, check your food through the convection oven’s glass door. It will allow less heat to escape. To prevent overcooking, check it frequently.

How quicker food gets cooked in a convection oven?

It can vary a little depending on which model you pick for a convection oven. But in general, convection ovens cook 25 percent faster than an equivalent conventional oven.

When should you use the convection oven setting?

You’ll find that many convection ovens allow you to use them as regular ovens as well and that’s the default setting, they have when they arrive. Many delicate foods are not great to be cooked with the convection mechanism, such as Custards and flans, Cakes, Souffles, etc.

However, here are the cases when you should definitely use the convection oven setting to experience its edge –

Can You Use Foil in A Convection Toaster Oven?

It depends on the use case. In a general sense, aluminum foil is not great to be used to cover the whole food in a convection oven, since hot air circulation is an important part of it to cook the food evenly, which the foil would hinder.

However, you can use the foil to cover a particular portion of the food which is delicate and might get overcooked compared to other areas if cooked for the same time.

What does Turbo mean in a convection oven?

Which food you should not cook in a convection oven?

The fan in a convection oven becomes a liability around delicate foods that tend to start out as batter and set while they get cooked. Blowing hot air on these types of foods can create lopsided results instead. These foods should not be cooked in a convection oven:

Breads: Although some contend that a convection oven produces great crust and even browning, others claim that the inside of the bread dries out. Now you decide.

So, among the 3 turbo convection oven recipes above, which one you’re going to try first? Chicken, beef, or are you going to try some frozen food?

Let us know how it went. 11 Korean Air Fryer Recipes to Spice Up Your Meals How to Make Fried Oreos [A Delicious Treat for Any Occasion] How to Cook Whole30 Chicken wings